As you may know, I manage to claw my way out of the stormy depths of undergraduateland recently, and will be graduating (escaping) university forever next month. However, before then I also have a Graduation Ball held at Blackpool Tower which, with the addition of the questionable line-up of Chase + Status (DJ set…), Miss Dynamite and someone I can’t even recall, is hopefully just going to be a very fancy piss-up. So this wishlist is going to be a lusty amalgamation of my Graduation Ball outfit wants and my graduation gift wants. I think the dress and the pink Moët are a definite though. Be mine.

Posted by Ebony in Fashion, Life

Today I applied for the 2013 Edited by the Interns competition on ELLEUK.com, which led me to recall that I’d never actually gotten around to doing a write-up about the week internship that I did there last October. My trip to London/Cambridge was so jam-packed crazy that I don’t even remember the couple of weeks after I returned home – I think I just did a lot of lamenting and hibernating. I managed to snag a placement from ELLE’s Market Editor Bonnie Rakhit after meeting her at a River Island x ELLE event in Manchester last summer, which you can read more about here. After a week or so of feverish email inbox refreshing, I finally got offered a week’s placement at ELLE and started planning (mentally spending) for my London visit.

London is phenomenal. I know it’s terribly, terribly cliché but I’m such a ridiculous city girl and thinking back to trips I’ve done to New York and London literally make me well up. I’m barely joking when I say that I’d chop off a limb, or lick a kitten heel to teleport back to either of them. Big cities bring out some weirdly confident Ebony, who seems to shrivel up in the dreary humdrum of Lancaster city, so I cannot wait until I escape next year and can move to the capital. Anyway, I digress. I’m fortunate enough to have a lovely aunt and uncle living near Camden who let me stay with them for the week, which was an absolute lifesaver because, dang – that city is expensive. If you find an internship but are struggling to find cheap accommodation, you should look into houseshares or hosts, with schemes like Room For Tea.

Step 1: Buy an Oyster Card. If you’re in the same London-novice boat that I was, you’ll be sounding the ‘Oy-what?’ card somewhere about now. The Oyster card system allows you to top up a card, akin to a phone top-up, which lets you roam the city through the underground/buses/other public transport – lifesaver. Not always the best of systems when you’re running for the bus and it’s at the bottom of a bag even Mary Poppins would think you’re a twat for carrying, though. Also not helpful when you’re late out of work, trying to get your clothes packed to catch the last train back to Cambridge – and stuck in a Friday rush-hour queue to top it up, in Oxford Street station. Even that didn’t dampen my chipper Northern-bastard-in-London spirit.

Step 2: Be proficient with a map (by which, I mean a very small, inconspicuous map) or don’t bother going without a smartphone with maps. Bizarrely, I found my way to the office without a hitch on the first day, but found myself completely lost on the third morning – running around like a prat with the biggest, most tourist-y map you’ve ever seen. Unfortunately, I’d just had my iPhone stolen a couple of weeks before my trip, so I was relying on my trusty old Nokia E71, which was pants. Oh, and you might want to get friendly with the tube system too – you will probably go out and get drunk, and you will undoubtedly nearly end up in the wrong place.

Step 3: If you have a Northern accent, you have special preparatory homework before you should go to a fashion internship. I worked with quick-talking European ladies from whom ‘Dries Van Noten’ rolled off the tongue to an almost sexy degree, whereas, my confused equivalent was a more ‘Uh, ‘DREES VAN NOHHHTEN’? And I don’t even have a particularly Northern accent. You need to be damn quick with a pen and the sticky notes too – shiz moves fast in these places, with no room for mistake.

Step 4: You might have to get up close and personal with some celebrities. No, I didn’t get my staple on with One Direction or braid Taylor Swift’s hair – but, I did return underwear that Victoria Beckham had worn on a shoot for the March issue. Geddin’, if that’s what you’re into. You’re going to be doing a lot of this returning too: I literally spent the entire week, bar about an hour (accumulative running up and down to the post-room time) doing returns from shoots. If you’re a fashion-lover though – in the clutches of endless Jimmy Choos and hiding in the jewelled cavern of the fashion cupboard – you’ll stay in your element 9 – 5.

Step 5: Go to Leon. Your mouth will thank me. So will your stomach, come 4pm when you’re salivating with hunger into a Moschino clutch. Trust me, the Pret superfood salad just isn’t going to cut it.

Step 6: Open your mouth and don’t be afraid to dress how you want to. I’m going to contradict myself with this one: I wore a really outlandish but arguably awesome hipster/Japanese-y/secretary/plain-crazy ensemble one day, and got complimented on it by one of the actual writers – which I was absolutely elated about – but instead of being all ‘Oh yeah, thanks! It’s from *insert plethora of stores*’, I giggled like a schoolgirl, squeaked ‘Thanks!’ and dived back into my fashion cupboard of solitude and safety. On the other hand, I did redeem myself towards the end of the week, when one of the other interns was working on a website feature with Bonnie, and I jumped in with a suggestion for them and she loved it. I spent the rest of the evening calling up my mum/dad/best friend/cat squealing that I’d got one whole line on the site.

Nervous and over-secretaried to Hell on the first day.

Step 7: Name drop me, please? I want back there. Pronto.

Today has been an absolutely unfruitful yet quietly productive day: I finally got my absolutely monstrously dyed hair coloured by a professional and the first half of my American Apparel order finally turned up. Oh and I didn’t write a single word towards my imminent Creative Writing deadline, but that’s tomorrow’s fun and games. Now, if anyone knows me in reality and has had the misfortune of seeing my hair, or the balls to just say ‘Ebony, what the hell did you do?’ of late, you’ll know that my hair has recently been an amalgamation of brown/ginger/black. Yeah… hot stuff. Here’s a little before image and a sorry explanation of ‘what the hell I did’:

END_OF_DOCUMENT_TOKEN_TO_BE_REPLACED

WIMH: What’s In My Handbag? 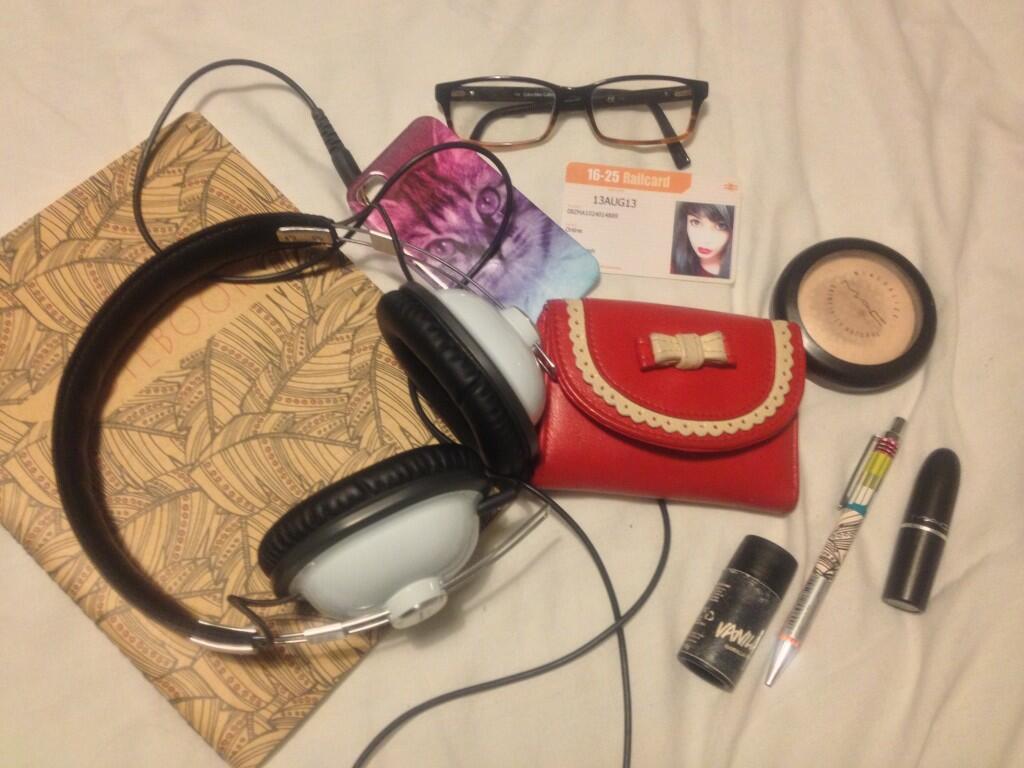 I’m bizarrely obsessed with these posts, seeing what ladies keep in their bags is oddly interesting – or maybe I’m just really nosey. For starters, I’m just going to put this out there: I never really carry a handbag. My bag of the day generally revolves around whether I’m in university or not and, if I am, it usually has to be a larger bag so that I can fit my MacBook and textbooks in there too – so I’m more of a satchel or backpack kinda girl. However, for the purpose of this post, I’ll just cut it down to the basic handbag-y items that I shove in my satchel:

END_OF_DOCUMENT_TOKEN_TO_BE_REPLACED

I notice that, again, I’ve been really quiet on the blogging front recently – primarily due to the fact that I’ve been catching up on the past couple of weeks at uni that I’ve missed. Apologies, apologies, I’m finally managing to get everything back in order so I’ll be back to posting regularly very soon. I’ve also had my iPhone stolen recently, if you were wondering why I’m barely ever on Twitter either, these days. Here are some posts that I’m looking to write hopefully before the end of the week:

And I’m sure I’ll think of plenty more soon.