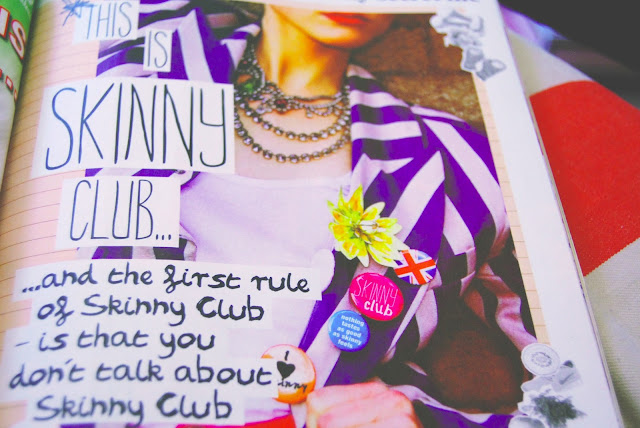 As a general rule, I’d happily call myself a fan of Company magazine. I find it seamlessly bridges the gap between blogger and magazine, featuring fashion bloggers heavily and always presenting an accessible idea of fashion, which is seldom found in the likes of Vogue – which even with the new Miss Vogue, doesn’t know how to financially cater to anyone who isn’t Millie Mackintosh. So, when I happened upon this feature, ‘This Is Skinny Club’, presented with a pro-ED slant on Fight Club’s infamous “the first rule of Fight Club – is that you don’t talk about Fight Club’ and a callous back-of-the-head shot from the snarky ‘anon’ writer – who finds it perfectly acceptable to release her warped idea of reality – in a manner that does nothing short of glamourising eating disorders, yet conveniently hasn’t the gonads to show her face with her little dynamite of a story.

The author of this little feature begins with an anecdote of her friend making her a birthday cake, which she painstakingly describes (“triple-layered, smothered in cream cheese” etc) to make the more foodie-minded of us drool, then gleefully admits of her betrayal whereby she lies to her friend about having a hangover, proceeding only to put the cake in the freezer to be forgotten about. Now, Jesus, alarm bells are going already. Where’s the trigger warning? Where’s the disclaimer? Company, where are you going to tell us that this is a potentially loaded post and that you do not advocate the views shown under any circumstances? The shoddy “Do you find this article offensive or refreshingly honest?” textbox on the second page does not suffice.

This feature hit home to me a lot, I know a lot about eating disorders and their effects. I’m not criticising the actual content of the article, merely the haphazard presentation and the carelessness of giving someone, who leaps out of the page as a ‘look-how-skinny-I-am-you-fat-trolls’ akin only to Regina George herself, such a public voice without a follow-up of “Oh, by the way guys, this isn’t good – this person is actually clearly quite mentally ill and will undoubtedly end up seeing a psychiatrist soon, if not already.” It fails to note the notably unfavourable side-effects of this alleged ‘Skinny Club’, such as actual physical illness, growing a layer of weird fuzz on your skin to ward off cold, not being able to go out because you’re too weak. Instead, Company highlights the most shocking opinions of the anon writer with a lovely pale-pink background, almost as though it’s the most important points in a leaflet of propaganda. “But is it worth it? YES! I love looking in the mirror.” – That girl may as well have written: if you’re not shivering around a Diet Coke after 200 push ups right now, you’re not worthy of holding this magazine and claiming to be interested in fashion and all things beautiful.

Anorexia is no joke. It’s not something that you can play around with. As much as ‘Anon’ doesn’t put herself across particularly fondly, I hope that her eating behaviours are merely a phase that she’s having a bitchfest about, and not the beginnings of a serious eating disorder. The sad thing is, I can relate a lot to what she says: I’ve felt that uppity ‘I’m skinnier than you, look at what you’re eating’ smugness, but then I’ve also done the absolute plummet of having blood tests every two weeks and watching as you tear yourself and your family apart without being able to control it. To be so blasé about something so potentially devastating is just terrible journalism. I mean, the subheadings are almost laughably baffling alone: “food fibs”/”no pain, no gain”. This isn’t someone on ‘Biggest Loser UK’, this is presumably a normal-sized girl, starving herself to sustain “Alexa-worthy pins” – and nobody’s sounding the WTF alarm.

Maybe the article could’ve been saved with a counter-tale, a focus on the unglamorous side of eating disorders. But presenting something of a tone and content that could quite easily be found on a pro-ana website, without focusing on the dangers, is nothing short of madness (in a mainstream women’s magazine, no less) – and makes me want to think twice about purchasing Company again. Even the webpage that readers get referred to offers a bizarrely nonchalant view from Company:

“In this month’s issue of company we featured a very honest writer who told us all why and how she stays skinny. For her that old Kate Moss saying “nothing tastes as good as skinny feels” couldn’t be more true. More so she revealed the fibs she tells (even to close mates) in her plight to stay in shape.”

5 thoughts on “‘This Is Skinny Club’ – Company Magazine.”